Our multidimensional team dedicates itself to giving students and professors a customized and completely immersed educational experiences at a fraction of the cost.

Since its inception in 2010, INCroatia has emerged as the leading provider of study abroad services in the nation. Founded by a Croatian-American couple whose lives were profoundly influenced by their own study abroad experiences, INCroatia fills the void between academic programs looking for an affordable yet stunning destination and local universities and logistics.

Local universities, still emerging from a history of limited cross-border exposure under Yugoslavia, often fail to connect internationally despite running excellent programs in top-notch facilities. When this facet is coupled with fast-blossoming tourist infrastructure and stunning natural and historical sites, Croatia is easy to recognize as an ideal European location for a wide variety academic programs.

But unlike traditional study abroad programs, we’re able to customize your program to your university’s learning goals. Working with our connections opens up many opportunities to study and see a number of places. You won’t be limited by one university, facility, city or even country.

Many of our members have gone on study abroad trips of their own. We understand the stress of finding housing, acclimating into local culture, and adapting to a new education system all while trying to see the sights. With unbeatable knowledge of the local terrain, we’ll take care of these time-consuming tasks for you.

• High end hostels ranging 25-40 euros a night per person
• Doubles and triples available, all with private bathrooms
• Hostels all walking or short driving distance from universities

All along the beautiful Mediterranean coastline, we’ll connect you to these institutions. We can also work with outside European Universities to add international students into your classroom. 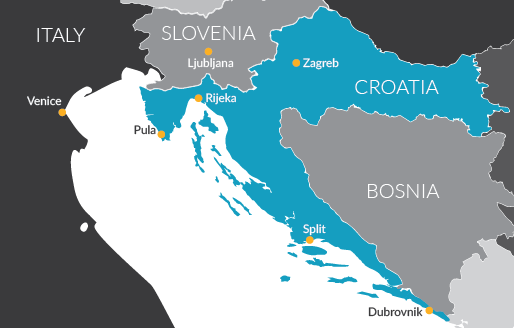 A host of facilities from the Austro-Hungarian style Pravna Fakulteta (Law School) in the center of Ljubljana to University of Rijeka’s sleek Filozofski Fakultet are at your students’ disposable.

With a team that knows American standards and expectations, we’ll fill your days off with diverse excursions! Your students will have 24/7 emergency assistance during excursions.

• Local festivals, plays or shows
• Historical landmark tours
• Sports to participate in and watch (anything from sea kayaking to soccer games)

We feel that the best way to experience local culture is to have real experiences. These are some sample excursions for students.

Wonders of Plitvice Lakes
Students can explore this ‘must see’ Croatian destination is Plitvice Lakes National Park, which has been listed as a UNESCO World Heritage Site since 1979. Sparkling cascades and monumental waterfalls mark Plitvice Lakes as the epitome of Croatia’s natural beauty, and over a million visitors each year agree unanimously.

The Roman Trail
Rediscover the glory days of the majestic Roman empire. We’ll drive the coastal road from Opatija and head to Pula via Labin and finish in Vodnjan. Students will roam the Pula Arena, the 6th largest Roman amphitheater in the world and see the incredibly preserved Augustus’s Palace, sitting at the heart of the city next to modern day cafes and shops.

Kvarner Bay Sea Kayaking
You’ll get a chance to escape the crowd and experience the Croatian coastal sites from an entirely new perspective! Paddle beneath impressive cliffs, uncover hidden caves and remote Croatian beaches, immersing yourself completely in Croatia’s most organic allure. No paddling experience necessary!

The Extreme: Water & Air
For those looking to get a kick out of their stay in Croatia we have prepared four enthralling activity options designed to capture natural beauty while pushing the adrenaline into gear. Options include: one-day-pilot, skydiving tandem jumps, wake boarding and sailing school.

Konavle Archaeological Tour
The Konavle archaeological tour sets itself apart as an unfiltered snapshot of Dubrovnik’s countryside and its ancient tribes, the Illyirians and Bogumils. Evidence of Paleolithic and Neolithic eras vibrate along the ruins of glorious caves and Konavle monuments. Flee modern Croatia and witness this archaeological majesty during our half day private tour of ancient Konavle.

Excursion to Diocletian’s Split
Don’t miss the opportunity to see Split’s central landmark, the UNESCO protected Diocletian’s Palace. The palace is one of the best Roman monuments from the Late Empire era. Unlike other historical destinations, Diocletian’s Palace sits at Split’s core, a city beating with the exotic bustle of three thousand locals and many more curious tourists!

Inside Istria
With this day trip, see Istria through the lens of its inhabitants. We’ll visit wineries, go truffle hunting, and medieval hilltop towns. Complete with a beautiful canvas of rolling hills, fertile ground and lush forests, the Istria region won’t disappoint you.

Past and Present Partners